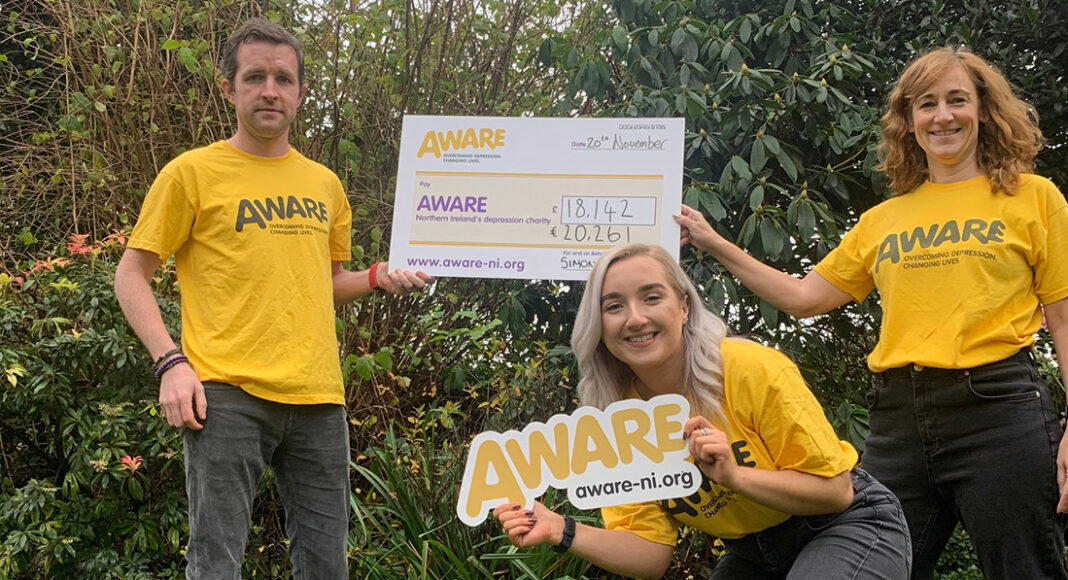 Image: Simon McEvoy presenting a cheque to Orlaith Strong and Lisa Abell-Farrelly of AWARE, the depression charity for Northern Ireland

County Down man Simon McEvoy is enjoying a well earned rest after running 5k in each county in Ireland in seven days at the start of September.

Simon, from Banbridge, has raised over £18,000 to date. He presented the cheque to AWARE Northern Ireland with the proceeds being shared jointly with Aware in the Republic of Ireland.

He is hopeful that he might receive a few more donations before the charity page closes at the end of this month.

Simon started his challenge on Sunday, August 30, in Belfast, which took in all 32 counties. He ran over 160 kms and drove 2,100 kms before finishing the following Saturday in Castlewellan Park, Co.Down.

Simon said, “As soon as I came up with the challenge in late July, my family and close friends were extremely supportive. We were really amazed and heartened by the generosity of others that helped raise these much needed funds for two worthy mental health charities.

“When I got started I thoroughly enjoyed the challenge, though it was tough being away from my family just when they were getting back to school and there were times it was hard to get motived.”

Lesley Wright, Community and Events Fundraising Officer at AWARE, said, “We are so delighted to be one of the beneficiaries of Simon’s 32 county challenge. Funds raised for AWARE in Northern Ireland will make a huge difference to those who have been affected by depression, anxiety and bipolar disorder.”