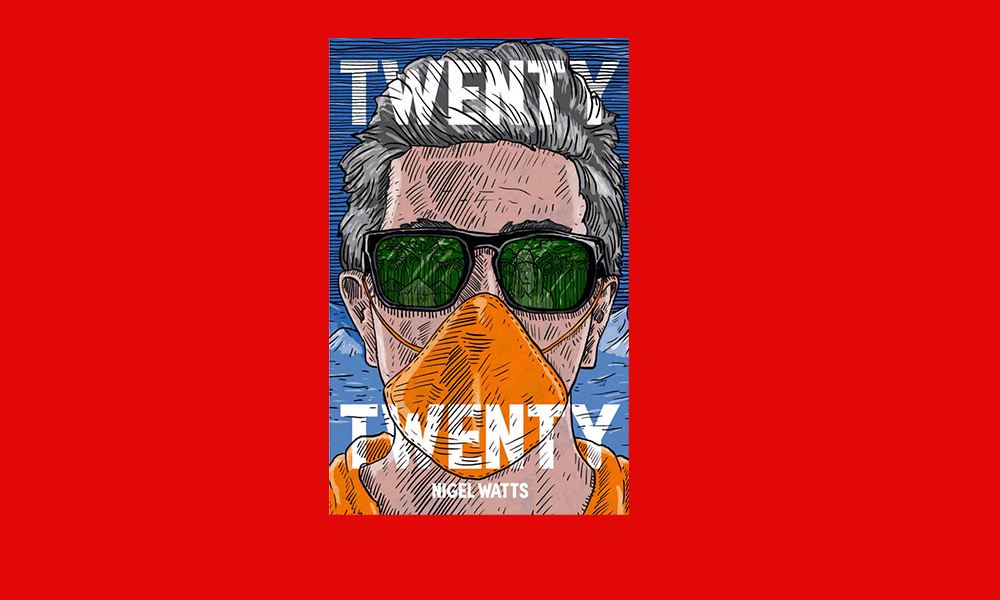 A 63 year old writer, infected with a deadly virus, has fled to a deserted village in the wastes of Northern Canada.

A global pandemic has swept the world.

Everywhere people are wearing masks.  They communicate through virtual technology.  Air travel has been drastically reduced.

Is this the latest coronavirus novel to be published this year? Does it herald a new trend of dystopian books about the pandemic?

Twenty Twenty was in fact published in 1995 by Hodder & Stoughton.  Its author, Nigel Watts, wrote it for his PhD in Creative and Critical Writing, where he studied at the University of East Anglia under the supervision of Malcolm Bradbury.

On publication, the review in The Times said: “It is a book to make the pulse race, the mind dance and the heart sink.”

When the author’s widow, Sahera Chohan, re-read it in spring this year, she realised just how prescient Watts’ vision was in 1995, and how much relevance it held for the world today.

She published the new edition jointly with Billington Publishing in August 2020,  almost exactly 21 years after Nigel Watts died by suicide, in November 1999.

Twenty Twenty, according to Sahera, is semi-autobiographical.  In her foreword to the 2020 edition, she quotes from Watt’s PhD thesis to illustrate how he intended the novel to be “a wake-up call to humanity”.

“I believe the consequences are clear enough: consider yourself a bag of bones separate from your environment, and you will have the moral immunity to treat the world and its contents as things. Taken to its extreme we have alienation and its concomitant fallout: crime, neurosis, the trashing of the environment.”

In one passage in the book, Watts writes,

“We deserve the plague, every viral cell of it. Not some post-AIDS moral bullshit about divine retribution, but the even-handed comeback of nature. Civilisation is finally dying, killing itself off with an excess of cleverness. And I am at the front of the queue. Good riddance.”

Twenty Twenty predicts with reasonable accuracy the horrific events of the pandemic which so far this year has left many of its readers bereaved and/or suffering from the disastrous effects of infection and economic disaster.

However, it is no 1984.  Watts lacks Orwell’s messianic vision of totalitarian political violence.

Nevertheless, as Winston Smith says in 1984: “The best books…are those that tell you what you know already.”

And there is no doubt that  Twenty Twenty, like 1984, has an uncanny grasp of the future and will fascinate readers.

As Michael Callanan, director of the Orwell Youth Prize, which supports political expression amongst young people, said of 1984,

“Some students are very shocked by it,  and remain shocked by it…It is part of the paradox of a book being 70 years old.”

At the end of the book, Watt’s semi-autobiographical ‘author’ says,

“And then I see it in front of me – the enormity. It has been there all along – just one more step and I’ll be over the edge.”

In 1995, Watts wrote Twenty Twenty as a call to action. And if there is one positive element to emerge from the current pandemic, it is, as VIEWdigital editor Brian Pelan said in the latest issue of the magazine, Building a Fairer Economy, “A phrase which has become common currency during the Covid-19 pandemic is: ‘We must not go back to the old normal; we need a new normal.'”

The clock is at one minute to midnight, the abyss is in front of us.

Nigel Watts warned us 25 years ago.

It has been there all along.  Just one more step and we’ll be over the edge.

Time to take a step back.