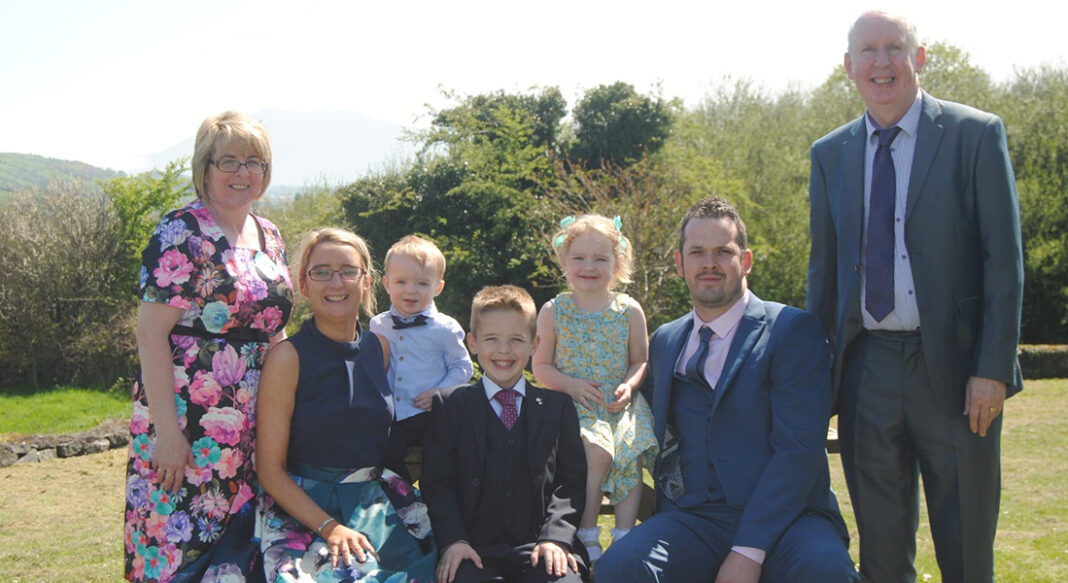 A mum has spoken to VIEWdigital about the huge emotional strain placed on her family after she, her husband, and her father, all had to self-isolate after they tested positive for Covid-19 earlier this year.

Katrina Dunlop from Ballyholland, Newry, contracted the virus in July along with her husband Kyle and her father Pat Fitzpatrick.

Her mother, Fiona Fitzpatrick, had to look after Katrina and Kyle’s three children; Tyler (10), eight-year-old Kacey-May, and three-year-old Riley, who are all asthmatic.

Katrina said the ordeal has had a lasting impact on the children and has left herself, her husband, and father, with lasting symptoms to this day.

Fiona and Pat had taken their grandchildren away for a few days in early July and on their return found that their son-in-law Kyle had tested positive and their daughter, Katrina was self-isolating.

“Kyle felt generally unwell and I took his temperature, but it was normal, but he decided to get tested and it came back positive,” Katrina said.

“Once mum, dad and the children arrived back from their break they then had to quarantine too.

“I remember it was a Sunday and I really did not feel well and slept the whole day which isn’t like me at all.

“As my husband was having to stay in our bedroom on his own, I was sleeping on the sofa and initially put my feelings of being unwell down to exhaustion and the lack of a good night’s sleep.

“Then on the Monday I had a cough, and I rang the Public Health Agency who informed me as a precaution to get tested at our nearest testing centre which was Craigavon Area Hospital.”

Katrina’s dad kindly offered to drive her to the testing centre and while he was there the staff said they would test him as well.

Pat had no symptoms, but however the following morning he felt out of breath.

Both results came through as positive on the Tuesday morning.

Katrina said it was a “huge shock” for all the household.

“Our eldest son, Tyler, really panicked and started crying saying he was worried we were going to die.

“He had watched so much on the news and in the media and automatically started to think the worst-case scenario.”

Katrina’s mum Fiona was able to look after her grandchildren and Katrina said this was the toughest part of testing positive, having to stay away from her children.

Katrina and her dad still experience tiredness and breathlessness as well as a dry cough.

“The impact on the children has been traumatic especially with Tyler.”

“With asthma playing up now at this time of the year he needs constant reassurance that his cough isn’t Covid-19.”

“We really felt like we were in the unknown, yes we had seen things on the media, but nobody actually discussed it, for me it was more the mental impact. There was also the worry of whether we were likely to catch it again.

“Personally, I think it’s better to talk about it openly and honestly, and hopefully it will be a source of reassurance for others.”

Children and Young People’s Commissioner for Northern Ireland, Koulla Yiasouma, said that Covid-19 continues to have a very far reaching impact on the lives of children and young people and their families.

“Children and families generally, have displayed remarkable resilience and creativity during this unprecedented and extremely difficult time, both during lockdown and now with further measures in place.

“There must be a collective effort and determination by government, relevant authorities and agencies to address these issues so that our children are given the assurance and certainty they need to confidently move forward with their lives.”