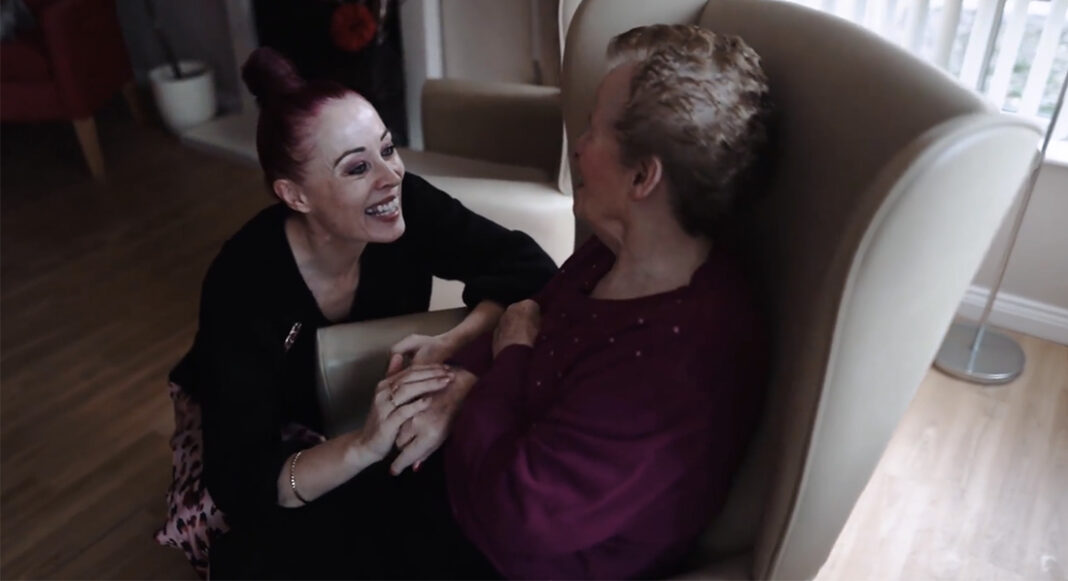 Main image: Martina Ferguson with her mum Ursula Derry before the first lockdown

By Laura Barr, reporting for VIEWdigital

A music video has been released to help keep the spotlight on the campaign by families for safe visits to their loved ones in care homes in Northern Ireland.

The song, ‘You Stood By My Side (mind)’, highlights the huge emotional impact that families and residents in care homes have faced since visits ceased nine months ago.

Clare has dedicated the video to the care home campaign which is calling on nursing home providers to implement the care partner scheme.

The scheme, which would allow for up to two people to safely visit relatives in care homes, was part of new guidance issued by Department of Health on September 23.

But only a small number of care homes have so far introduced the care partner scheme.

Martina Ferguson, whose 87-year-old mother, Ursula Derry has advanced dementia and is a resident at a care home in Portadown, features in the video holding up written messages highlighting her appeal.

“There is no doubt that throughout lockdown, my mum has become withdrawn, she is not the same woman I last seen in March.

“Human touch is so important for everyone, and especially people with advanced dementia because they can’t verbalise. They need human contact to feel loved and feel a connection.”

Ms Ferguson said: “The response to the video has been really positive so far with more families affected getting in touch.”

Last Tuesday, her legal team KRW Law lodged papers at the High Court seeking an urgent judicial review over the policy at her mother’s residential home in Portadown.

Ms Ferguson told of her “deep regret” at having to take legal action, but said she is desperate to hug her mum.

“We have engaged with the Department of Health, the Chief Nursing Officer and Chief Social Worker for NI around the care partner role and concept, and we are extremely disappointed that nothing has been implemented.

“The Department of Health, under Minister Robin Swann, endorsed the government guidance back in September, so it is frustrating that care homes have not set about making the changes.

“The care partner role must be a mandatory role with no time restrictions on visiting for care partners. It needs to be about meaningful and quality time together for family and residents.

“The Northern Ireland Executive must ensure that every care home implements care partners for each resident without delay.”

As well as supporting the release of the music video, Martina and Julieann are asking people to sign the online petition which calls on care homes to implement care partners for elderly residents.