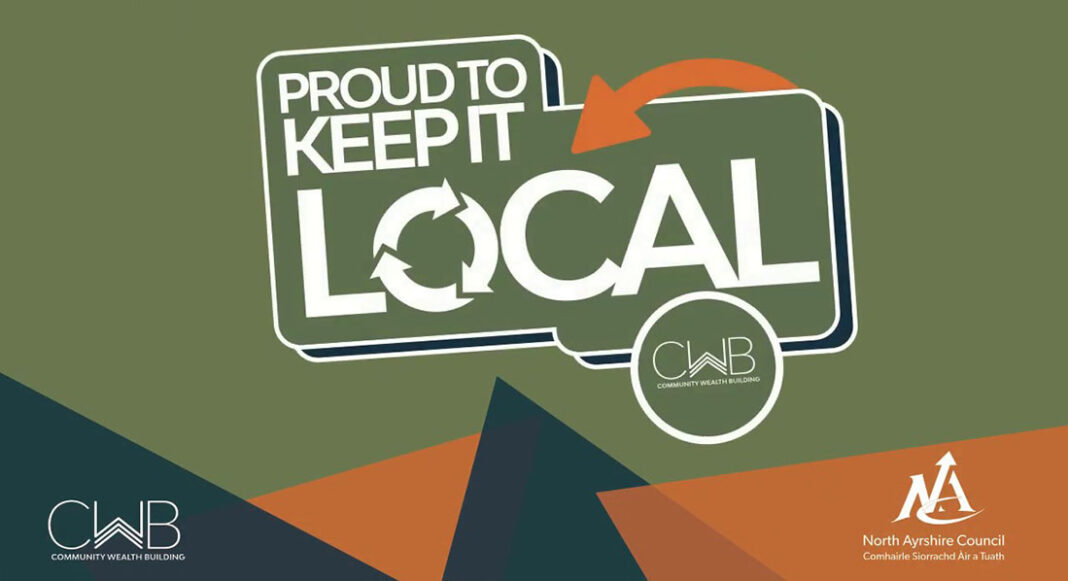 Joe Cullinane, above, leader of North Ayrshire Council, and a member of the Scottish Labour Party Shadow Cabinet, talks to VIEW editor Brian Pelan, about why he believes that a Community Wealth Building strategy can play a vital role in creating a more equal future in a post Covid-19 world

Brian Pelan: According to the Office for National Statistics, Britain’s economy is officially in recession for the first time since the 2008 financial crisis. How do we create an alternative to this gloomy economic forecast?

Joe Cullinane: We need a new economic model. If you look at what happened in 2008, there was this urge to just restart things as normal. During the financial crash we saw the really bad side of the global financialisation of the economy. Basically they were propped up and bailed out, and the rest of us got austerity. The key now in 2020 is that we learn from the mistakes. It’s now time to build back a better model – something, different, something new. For us in North Ayrshire, our role is in building something new that will be community wealth building. Trickle down economics just doesn’t work for an area like North Ayrshire, and it doesn’t work for the country as a whole. We are taking back control of our local economic landscape by using the public pound to build something different. We’re looking at land and assets; looking at setting up generative forms of business ownership, co-operatives, social enterprises and community interest companies – things that have a different value set to the big multi-nationals.

Joe: It does require system change from the ground up, not the top down. It requires public bodies to be working as anchor institutions – the NHS, colleges, police and fire. It’s about how do we operate differently and looking at the value of our own resources. The ambition in North Ayrshire Council’s strategy is not to just look at procurement and assets, it’s about the ownership of the economy.

Brian: Can you outline to me the various roles of the ‘cabinet’ that has been set up in North Ayrshire Council?

Joe: We inherited a ‘cabinet’ model from the previous system where the members of it matched the leadership structure of the council’s officers. Now is the time, post Covid-19, to reframe that ‘cabinet’, and to focus on the emerging priorities. I, personally, have decided to take on the responsibility for Community Wealth Building. We have another member who is looking at how to develop a green sustainable approach which protects the economy. We’re also trying to open up the council’s structure to popular participation, and we have a colleague who is working on participatory democracy.

Brian: Is Community Wealth Building part of a wider transformation which is needed to rebuild the economy?

Joe: Absolutely. It’s place-based economics, something as a local authority that we can start to influence. Our approach is a stepping stone towards building a new economy. We need to look at bigger changes across Scotland, and bigger changes across the UK. Our expert panel for Community Wealth Building has a lot of progressive economists sitting on it. We also have representation from the Scottish Trade Union Congress (STUC) and Co-Op UK. It’s all part of a wider transformation in the Scottish economy that we need to see.

‘I am a socialist so I am always optimistic. I think there is a future there to be designed and built and we will try and do that with our community wealth building strategy’

Brian: What is your relationship like with the Scottish Nationalist Party (SNP) and the Conservatives in terms of a Community Wealth Building approach to the economy?

Joe: We’ve been on this journey in North Ayrshire Council since 2018. It was in March 2019 that we signed the terms for the Ayrshire Growth Deal. The night before we signed it, the Scottish Government put £3 million on the table for a Community Wealth Building fund within the growth deal. We’re looking at how we take that forward across Ayrshire. There is some cross-party work already. One of my big frustrations in all of this is that we were looking at Community Wealth Building well before the Ayrshire Growth Deal, but the Scottish Government tend to describe our wealth building approach as a pilot. I would absolutely kick back against that description. We are not a pilot. We are not doing this on behalf of the Scottish Government. They are the ones who are supporting us and our ambitions.

Brian: “The ‘new normal’ looks all too like the old. And that means the poorest people lose out,” said Barry Black, a postgraduate researcher at University of Glasgow School of Social and Political Sciences, who was commenting on the exams controversy in Scotland. How does education fit into your strategy?

Joe: Education will play a key role and is a vital part of our strategy. A vibrant economy will offer job opportunities to young people.

Brian: High streets in cities and towns have been badly hit during austerity, and even more so, during the pandemic, with the surge in online shopping. Will Community Wealth Building revitalise this sector?

Joe: Housing will play a big part when it comes to the future of our high streets as well as retail. We have a number of projects which are looking at putting housing back into the high street as part of a regeneration strategy.

Brian: Does the ‘average’ man or woman in North Ayrshire understand what a Community Wealth Building strategy means in terms of improving their lives?

Joe: I think there is a better chance of it now. Plans for a public launch of our Community Wealth Building strategy had to be changed because of the lockdown. We decided to livestream it instead via our council’s Facebook page. It has now had more than 11,000 views. I think there is now a much more wider knowledge and appreciation of what we are trying to achieve.

Brian: Do you still envisage private companies being able to tender for public contracts when it comes to a Community Wealth Building strategy, or should there be a radical change in how the tendering process works?

Joe: I was still a schoolboy when Private Finance Initiatives (PFIs) were introduced. From a political point of view, I’ve always been opposed to PFIs whether it has been a Labour or Conservative model. In terms of procurement and tendering generally, it’s not about breaking the regulations, it will still be a legal process, but what we are looking to do is making sure that our local businesses are competitive and are able to bid for contracts. Procurement can be no longer, in my eyes, be a technocratic approach, it has to be a really powerful economic tool in which we are trying to influence the economy. Nationally, the economy should, post Covid, look to have a social licence to operate. So any company, regardless of their size, who want to win public contracts, should have a social licence approach, such as paying the living wage, not to use zero-hour contracts, and to look at the environmental impact of how they deliver that contract.

Brian: Will the Community Wealth Building strategy still exist if the SNP seizes control after the local elections in 2022?

Joe: I have no intention of losing in those forthcoming local elections.

Brian: And finally, are you optimistic or pessimistic about the future in terms of the economic challenges ahead of us?

Joe: I am a socialist so I am always optimistic. I think there is a future there to be designed and built and we will try and do that with our community wealth building strategy. We have an opportunity to do something which is truly transformational in North Ayrshire. I am determined to make it work.

• To read the latest issue of VIEW, go to https://issuu.com/brianpelanone/docs/economy_issue_of_view

‘Carers often feel invisible to all of us. They should not be invisible to those they love who live in care homes’

Fearful time for cancer patients as surgeries are cancelled due to...

‘Carers often feel invisible to all of us. They should not...

Fearful time for cancer patients as surgeries are cancelled due to...