Home News Cost of Living crisis: People need to hear what is going on,... 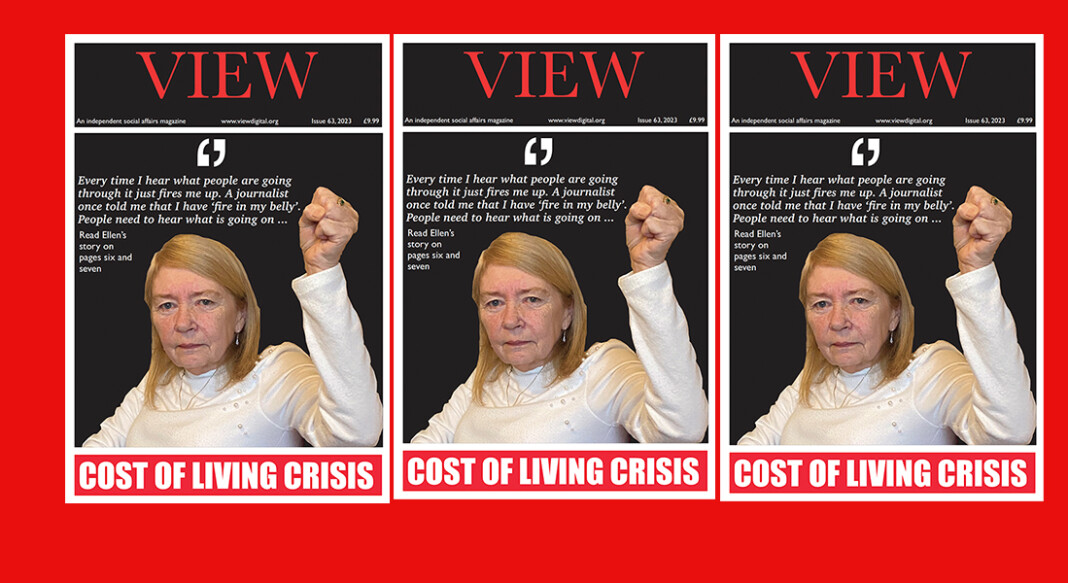 Mother and grandmother Ellen Moore is a remarkable working-class woman. Despite recovering from throat cancer and living with leukaemia, she has regularly added her voice to those protesting about the Cost of Living crisis.

I travelled to Derry to meet Ellen at her home on the Creggan estate. Her home was festooned with festive celebrations but the 62-year-old pensioner said her heart wasn’t really in it.

She knows all about trying to stretch out a meagre budget in order to try and survive the harsh economic climate.

“I will often sit in the dark rather than turn on the lights. Putting on the central heating is a no-no at the moment for a large part of my day,” said Ellen.

She has four sons and two grandsons. Her husband died a number of years ago.

“I was born and bred in Derry in Springtown Camp,” said Ellen.

Springtown Camp was a former US military camp near Derry, Northern Ireland, that housed up to 400 Catholic families in the 1940s to 1960s in substandard housing rented by the local authority. The outcry over the Unionist-controlled city council’s failure to re-house the tenants in proper buildings gave rise to some of the first Northern Irish civil rights protests of the 1960s.

‘I spoke to a young mother last week. She told me that when she goes to pick up her children from school, she will put a pile of hot water bottles on her bed. She brings her children in and puts them to bed. She then makes toasties for them. Whatever they don’t eat will be her main meal for the day. Her story broke my heart’

Ellen spent many years working in Bookworm in Bishop Street, Derry. The bookshop closed in 2014. Before working in the bookshop she had a number of cleaning jobs. She still enjoys reading, especially Ian Rankin’s crime novels. She moved into the Creggan estate in 1990.

She told me that she is currently receiving chemotherapy treatment for her leukaemia. “I am always cold due to having a blood cancer. I bruise very easily with the least wee knock.”

I asked Ellen how does the current Cost of Living crisis compare to other tough economic times in her life? “I thought it was tough when my boys were young but that was easy compared to now,” replied Ellen. “The price of heat and food seems to have doubled.

“I usually sit in my living room with a big blanket wrapped around me and a hot water bottle on my lap. I only put the heating on for a short while. I go to bed a lot earlier now because it’s warmer.

“I spoke to a young mother last week. She told me that when she goes to pick up her children from school, she will put a pile of hot water bottles on her bed. She brings her children in and puts them to bed. She then makes toasties for them. Whatever they don’t eat will be her main meal for the day. Her story broke my heart.”

Ellen got involved in a campaign earlier last year in Derry which is holding protests about the Cost of Living crisis. She said she was nervous at the start but is glad to speak out now. She has also been interviewed many times by the media.

“Every time I hear what people are going through it just fires me up. A journalist once told me that I have ‘fire in my belly’. People need to hear what is going on,” she said.

“I’m doing something even though at times it feels like you are banging your head against a brick wall. I personally feel that the government in England and our politicians should hang their heads in shame for allowing this crisis to happen. When the war in Ukraine broke out the Government sent money, including tanks and aircraft, but they claim they have had no money for our health service.

“The NHS has been in decline for the last 20 years and yet they blame the nurses for going on strike. When I was growing up to be a nurse or a teacher, it was considered to be a good job. Now some of them are having to go to food banks. I know a nurse who actually gave up her job because of the poor wages. She is now stacking shelves in a supermarket.

“People are demoralised and worn out by the Cost of Living crisis. They just worry all the time about how they are going to heat their homes and put food on the table. I know of so many adults and children who are going without. My heart just breaks for them. Even food banks are having less and less donated to them.

“Nobody in this day and age should have to go to a food bank.

“I know there are going be so many old people who are going to die this winter because they don’t have the money for heat. They could be lying dead for a while before anybody notices.”

Ellen raised her fist for a photograph I took of her at the end of our interview. Despite her own health difficulties she really does have ‘fire in her belly’. It was an honour to meet her.

• Read our latest issue of VIEW – Insight into Cost of Living crisis – https://viewdigital.org/latest-issue-of-view-magazine-insight-into-cost-of-living-crisis/