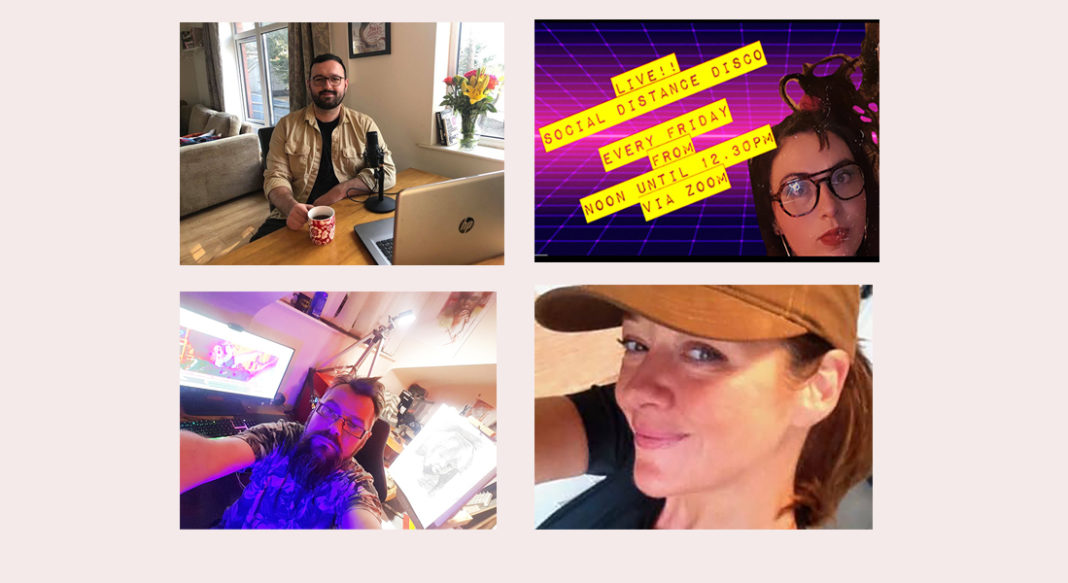 Art galleries, music venues and theatres allow artists an opportunity to showcase their creative talents and for audiences, a moment of escapism. Over the past four weeks an unprecedented amount of creative spaces have closed, creating uncertainty in an already precarious industry. With creativity in lockdown, four creative professionals offer a snapshot of how their profession has been impacted and how some are continuing to engage audiences at a time when escapism is possibly more important than ever.

Ross, who lives in Belfast, is a researcher for factual television. With short term contracts being the norm he talks about the impact of the pandemic on his industry in terms of employment and content.

“My main profession is working in factual TV as a researcher. I’m in the sort of forgotten category of people.  Coronavirus has exposed a lot of the holes in our industry for protecting junior members of the industry. The major broadcasters are looking for coronavirus content and my concern is that it’s going to take away from the escapism side of things.

“Me and two other colleagues have started a media company called the Human Collective and part of it is a podcast which is about three guys with three different perspectives talking about what it’s like when you start at a company as a junior who has got dreams of being an AP (assistant producer), a producer, and what that is like for people trying to navigate in the Northern Ireland industry and beyond.”

Jamie is a founder member of Vault Studios, an artist community based in east Belfast. He is also the unofficial world record holder for most portraits drawn in a hour.

“For a lot of artists it’s something you have to do to achieve a balance of mental health. I didn’t quite know what I wanted to do at home but I knew I needed to create some sort of project for me to keep me interested. The very first day I streamed some of my old live art footage and I decided that I was going to do drawings and video them. There’s something nice about the idea that you can be included in something without any pressure to having to engage with it but still feel like you’re in company.

“I’ve actually sold a couple of pieces. People got in touch and wanted to buy them. So financially it’s become somewhat viable for me.”

Nicky is a Northern Ireland actor who has created social distance disco to allow people a safe space online to let down their hair and cut a few shapes.

“I was in the middle of touring a production when the lockdown came in. Before that stage you could see audience members were very nervous about attending theatre spaces. Over the space of an half an hour I lost all my work for the year. Social distance disco is an opportunity for people to be brave in their own home and to forget about what is going on. The ethos of it is to turn on your video camera and let other people see you dancing and feel connected.”

Frances is the General Manager for Big Telly, a theatre company based at the Flowerfield Arts Centre in Portstewart. Big Telly have switched on their ‘Little Telly’ – a commission for artists to create interactive performances.

“We are keenly aware that it’s really difficult for actors, performers and artist at the moment because money has dried up so we are trying, when ever we can, to get people in some kind of employment so the commissions are about putting arts experiences online but it’s got to be interactive. We don’t want content that people switch on and watch. We want live content that actors are almost reaching out from the screen and getting people involved,” said Frances.

Review: Garcia’s book is part ‘love letter’ to a community which has often been misunderstood, isolated and failed