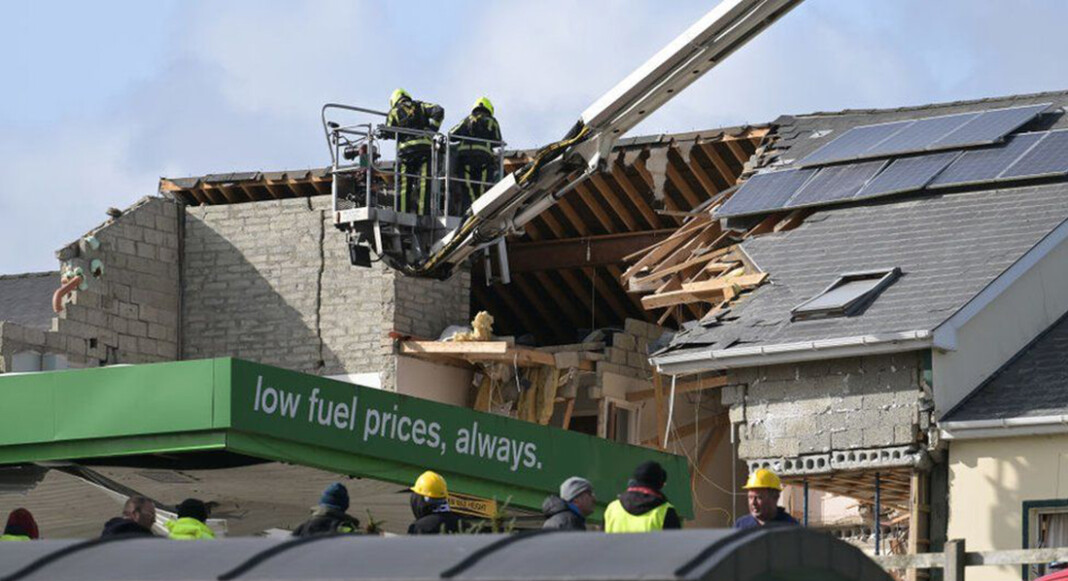 Our small community has changed a lot since last year’s edition of The Creeslough View. None of us could have ever predicted that the town of Creeslough and its people would be changed in a matter of moments and thrown into the global spotlight.

The date of Friday, October 7, 2022, will be forever etched in our hearts and minds. Little did we know that at precisely 3.18 pm everything was about to change forever.

That afternoon word soon filtered through that there had been some sort of explosion in the shop in the town. It didn’t take long for it to become apparent that this was a huge tragedy on a scale that no one could ever have imagined.

Like many from the area, I work away during the week and return home at weekends. Just before 4 pm, I received a call from home telling me there had been some sort of explosion in the shop in the town. My heart immediately sank as I knew how busy the shop would have been on a Friday afternoon. As I drove the four-hour journey home to Creeslough that evening, I don’t think I truly understood the enormity of the situation that was unfolding at home.

Every so often I would pull over and ring home for updates. The news being relayed to me over the phone was incomprehensible. I could never have predicted the devastation that had just befallen our small community. It’s such a cliche, but this is something we see covered in the media all the time. Tragedies like these happen to other people, in other countries. But we never ever think that something like this could happen to our little town, to people we know. It was like something from a movie or a nightmare. It was such an unlikely thing to have happened in somewhere like Creeslough that if I had seen it in a film, I would have laughed at how unrealistic it was.

Anyone who has grown up in the area will have said many times as bored children or teenagers, that ‘nothing ever happens in Creeslough!’. In hindsight, we didn’t realise how lucky we were that most people had never heard of our small town. It’s the type of place that people know from driving through en route to somewhere else.

‘There are no words really to describe how humbled we all were by the thousands of messages of support from people all over the world. I think it resonated with people because this could have been a petrol station in any small rural village, anywhere in the world’

Nothing could ever have equipped us for the media invasion and the spotlight Creeslough was put under in the days and weeks following the explosion. Suddenly, Creeslough made headlines around the world and was on every news station and on the front of every newspaper. It even trended worldwide on Twitter, something usually reserved for a Kardashian or Lionel Messi. Journalists were everywhere and news reports were coming live from the town almost every hour. TV cameras filmed people as they left funerals, and family members had their pictures splashed on every front page.

Friends used to joke with me about where I was from, as they had never heard of it. But I never imagined that Creeslough would one day receive worldwide media attention.

Minutes of silence were held at international sporting events all over the world, including Celtic, Liverpool, Arsenal, and Man City (just to name a few). Millions of euros were donated by people all over the world who felt helpless and wanted to show their support in some way. It was hard to believe all these kind gestures were in support of the people of our little town.

There are no words really to describe how humbled we all were by the thousands of messages of support from people all over the world. I think it resonated with people because this could have been a petrol station in any small rural village, anywhere in the world. It could have been them popping in for something for dinner, to use the ATM or to get petrol. Of course, it should never have happened to anyone, in any town, anywhere in the world. But it’s hard to comprehend that for some reason it happened in Creeslough. Our town, to our community.

In the days and weeks following the tragedy, we tried our best to use The Creeslough View Facebook page as a source of information to keep people updated. In the three weeks after the explosion, our posts had been clicked on or shared almost 160,000 times. Almost 30,000 people clicked on the Facebook page. That is extraordinary. People may not have realised the power of simply liking or sharing our posts and how vital it was in allowing us to share updates and support services information.

Unfortunately, so many of our community were caught up in the explosion. 10 people lost their lives and many more were injured. Let us remember those we lost far too soon; Catherine O’Donnell, James Monaghan, Martina McGill, Jessica Gallagher, James O’Flaherty, Martina Martin, Hugh Kelly, Robert Garwe, Shauna Flanagan Garwe and Leona Harper.

‘Our small community is forever changed and may never be the same again. But we will not let this tragedy define Creeslough or its people’

Let us also remember those who were injured in the explosion. But also, those who have been affected in any small way. Friends, neighbours, colleagues, and those who turned up to help at the scene that Friday afternoon.

A special thanks to Fr John Joe Duffy who has been the rock of the community and given so much solace and comfort to many people. Not only were we grieving but he was too. He had the most challenging of circumstances to navigate, and he did this with courage and grace. We can’t ever thank him enough for the comfort he has given so many of us.

Unfortunately, the grief and trauma caused by this tragedy will not heal in a few short months or even years. Our whole community will be impacted by this trauma in some way for many generations to come. Dealing with trauma is complex and will take time and a lot of support from mental health professionals.

But outside of the professionals, we will need to rely on the support of our friends, family and neighbours to get through this together. Talking is of course important, but sometimes words themselves aren’t even necessary. Over the next while somehow, we will have to encourage healing. But it is difficult to heal individually at home isolated on our own. We need to come together.

So, we shouldn’t wait for a reason to send that person a text or a phone call. We shouldn’t hesitate about calling in to our neighbours for that cup of tea and a chat. We need to make the time to do things together- especially in the evenings and the dark winter nights ahead. They will be the hardest and loneliest. The little moments we share over the next months and years will be extremely important in helping us support each other through the most difficult times.

The media may have gone home, and it feels like the rest of the world has moved on with their lives. But Creeslough will stand still forever stuck at 3.18 pm on that Friday afternoon on October 7, 2022.

In years to come, people of our town will judge time as life before that afternoon and life after that fateful afternoon.

Our small community is forever changed and may never be the same again. But we will not let this tragedy define Creeslough or its people. Instead, we will try to ensure that Creeslough is remembered for our small, close-knit community. Where everyone literally knows everyone and neighbours look out for neighbours. That’s the way it has always been, and that’s the way I hope it will always be.

Best wishes for the year ahead.

• Marie Duffy is from Creeslough, Co Donegal and is the editor of The Creeslough View magazine – a community project which documents the rich cultural heritage of the Creeslough area.