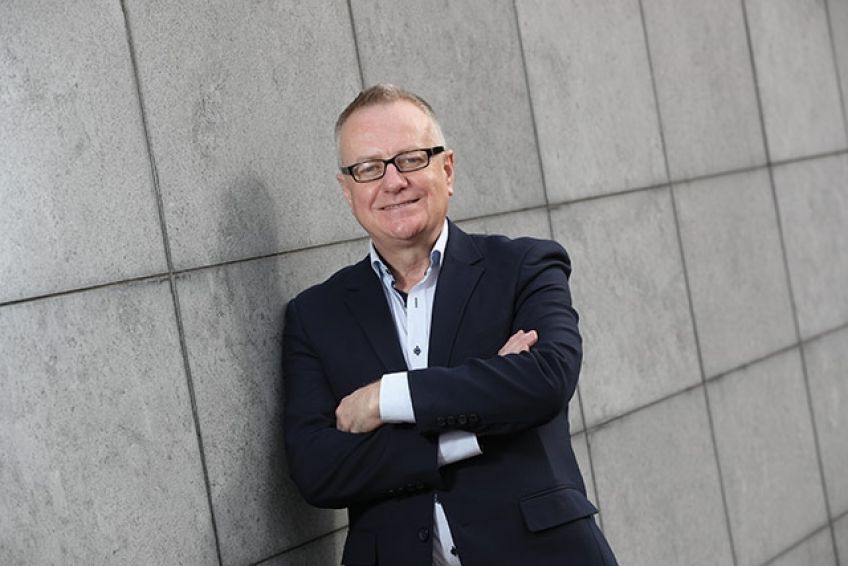 County Armagh-born Professor Paddy Gray is inextricably linked with housing issues and is a regular media commentator. He has also written on many occasions for VIEW magazine. I recently caught up with him in Belfast.

We started off by chatting about where he was born.

“I grew up in a one-parent family in a small estate in Armagh. It was known as ‘Tin Town’. My mother steered us all in the right direction and made sure that we went to college.”

Paddy ended up studying social sciences in Jordanstown Polytechnic (later to become the University of Ulster) in the late 1970s. His first job, after leaving the polytechnic, was working in 1981 in Rathcoole, north Belfast, for the Northern Ireland Housing Executive (NIHE).

After working for the NIHE for six years, he left to take up a post as a lecturer with the University of Ulster in Derry.

“They had advertised for a housing lecturer. I applied for the post and got the job,” said Paddy. He went on to do a Masters and ended up as a professor.

Since much of Prof Gray’s world revolves around housing, I was keen to hear did he have a ‘big vision’ of what it, ideally, should look like.

“I believe in good quality housing for all,” he replied. “I’m not saying everybody should live in public housing. I’m not saying that we should have a Soviet-type system. But people should have a choice about where they live. Some people are excluded and don’t get a choice.

“We have a social housing system which is highly stigmatised. We also have a private rental system with many landlords being good landlords. But there are also bad landlords.

“I suppose my vision for housing is that everyone has a choice to get good quality housing and that no one sleeps on the streets, and that no one is forced to live in temporary accommodation for a long time.”

Since Paddy owns and rents a number of properties I asked would he describe himself as a “good landlord”?

“I get someone to manage the properties. All the houses I have are houses that I have lived in. I would see myself as a good landlord.”

Prof Gray also sits on 14 housing boards, including in Northern Ireland, Scotland and the Republic of Ireland.

Our discussion moved on to the spiralling rents in the private housing sector in the Republic of Ireland. Is government regulation the answer in terms of capping rent increases, I asked?

“Yes, to a certain extent,” he said. “There are rent controls in the Republic. I sit on a regulatory board.” He went on to say that he had sympathy for many people who were struggling with high rents in the private sector.

We also discussed the break-up of the Housing Executive in Northern Ireland and could he envisage a return to large-scale building of public housing here.

“It’s not possible because of the way the system is at the moment,” he said. “The model being proposed is to take the Housing Executive out of the public sector.”

We also discussed the concept of the need or desire to own one’s home. In Ireland, historically, this wasn’t always the case, I argued. But post-Margaret Thatcher the idea of a home as an asset started to take hold, especially with the sell-off of public housing to tenants. Was this a positive or negative development, I asked?

“I would possibly sit on the fence in regard to that question,” replied Professor Gray. “I’m not left-wing. I’m not saying everything should be public housing. I believe in choice. People do want to live in and own their own homes because they can see prices going up. It’s all about supply and demand. If there is a high demand for housing, then prices are always going to go up.”

Two other areas that have Prof Gray’s attention are homelessness and mental health. He became quite passionate when he talked about his definition of what it’s like to live without a roof over your head.

“When we think about homelessness, we think about people lying on the streets,” said Prof Gray. “It’s much more than that. It’s about sofa-surfing and living in intolerable conditions. It’s also about domestic abuse and having nowhere to escape to.

“I believe everyone should live in safe, good-quality accommodation.

“It’s good to see that there is less of a stigma now in talking about it. It was very different when I was younger.”

Our interview ended on a slightly surreal, but fun, note, with Paddy singing me a few lines from the well-known Irish ballad, Carrickfergus.

We didn’t agree on everything in terms of housing policy, but one has to admire Prof Gray’s passion and zest for life, and his honesty when it came to talking about his own personal struggles with mental health.

• Four Ways You Can Help Us Build Our Quality Journalism – https://viewdigital.org/our-60th-edition-of-view-magazine/