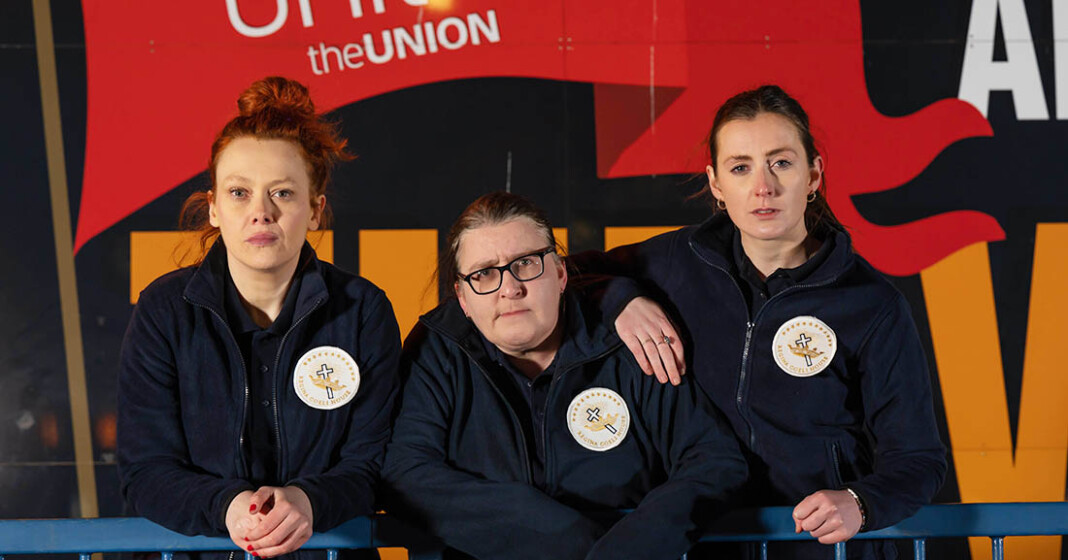 Kabosh Theatre Company has teamed up with Unite the Union to tell the story of the remarkable women who occupied their workplace in an attempt to save services at Regina Coeli House, Northern Ireland’s only dedicated women’s homeless hostel.

Not On Our Watch has been written by actor and playwright Louise Mathews after many hours of talking to the members of staff who occupied the west Belfast hostel.

The play is a searing account of the events which began with the hostel’s management committee announcing its closure and ended with a 12-week occupation supported by Unite, the wider trade union movement and women’s groups across the north.

Louise Mathews’ script ends with promises by the authorities to have enhanced, women-only services in place by May 2022. To date, this has not happened and the building remains empty.

Louise said she was moved by the story of these women.

She said: “Not On Our Watch is a tale of neglect and how the statutory authorities have utterly failed and continue to fail vulnerable women. It was the bravery, spirit and determination of staff members to stand up against the decision to close the hostel that provides the basis for this drama. They ended their occupation in March 2022 after they were given assurances by the Department for Communities and the Housing Executive that a women’s hostel would be in place by May 2022. Eight months on this still hasn’t been delivered and the fight for a hostel to protect women goes on.”

Not On Our Watch tells the story of three fictionalised staff members, based on the six women who kept the hostel open against the wishes of the owners the Legion of Mary, and its management committee – and of the multiple women who sought refuge in the hostel. It blends real people with these fictional characters, using real comments of union leaders and Belfast city councillors to add veracity to the story.

Kabosh Artistic Director Paula McFetridge said: “Louise has produced an amazing piece of work, full of compassion for the broken lives of these women while at the same time angrily denouncing the system that has failed them in every way possible.”

The cast of Bernadette Brown, Catriona McFeely and Rachael McCabe, supported by song-writer Katie Richardson and designer Elle Kent,  play a range of characters including the three staff members, opinionated union rep Aoife; gentle shy Grace and brave motherly Mary. The ‘guests’ they look after are in the hostel for a range of reasons including human trafficking, domestic abuse, drugs and drink dependency and debt to paramilitaries.

The three of them work hard to provide a supportive home for these women who have arrived in the direst circumstances, while at the same time coping with their own lives.

The workers begin to feel isolated and morale is low when in October 2021 the announcement is made that the hostel is to be closed by February 2022. The reason given is that the hostel faces an estimated £500,000 repair bill, though the survey in question was never forthcoming. The workers sense once the final guests are evicted, and the doors close, a fit-for-purpose facility will never be opened.

They decide to take a stand and have a work-in to raise awareness. Unite takes up the case against the decision to close, calling on the Housing Executive and the Department for Communities to independently run the hostel.

Susan Fitzgerald, Unite Regional Co-ordinating Officer, said: “Unite is excited to be involved in the commissioning of this new play by Kabosh which tells the story of our members who stepped forward to save Northern Ireland’s only women-only supported housing hostel.

“The women who worked at the facility conducted a historic 12-week occupation and work-in to sustain the service. Facing down threats of eviction and gaining global admiration, the workers secured the promise from a Minister of a like-for-like facility.”

One of the women who took part in the work-in, senior support worker and shop steward Emma McCann said that Not on Our Watch depicts the real life events at Regina Coeli and the massive impact that the decision to close had on the lives of many women.

She added: “We supported and continue to support demands for an all-women hostel in Northern Ireland and proper services for women who find themselves homeless. We were promised a hostel by May 2022 and this has not happened. There is no longer anyone in place at Stormont to be held accountable and meanwhile women are dying on the streets of Belfast.”

Not On Our Watch is presented at the Deer’s Head (part of the Out to Lunch Festival) on January 25 2023 at 8pm, followed by performances at Brassneck Theatre in Hannahstown on January 26, 8pm; the Little Theatre Bright Umbrella in Castlereagh Street on January 27 at 8pm, The 100 Club at the Duncairn in Duncairn Avenue on January 28 at 7.30pm and Lyric Theatre’s Naughton Studio on January 29 at 3pm.

• Read interview with Louise Mathews in the latest issue of VIEW which looks at the Cost of Living crisis – https://viewdigital.org/not-on-our-watch-will-give-a-voice-to-women-who-lived-in-regina-coeli-hostel-says-playwright-louise-mathews/