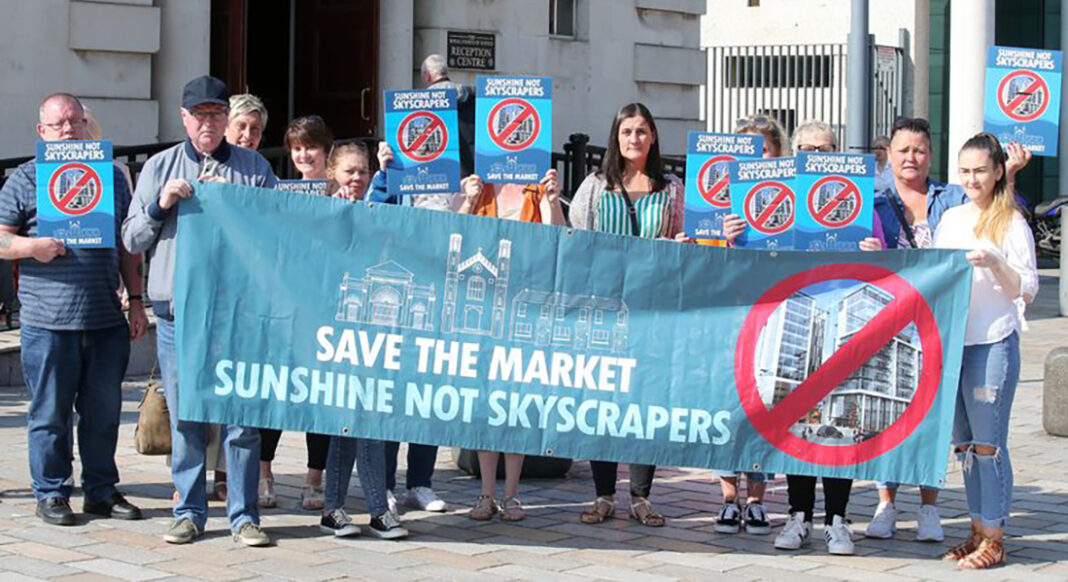 A controversial planning application for high rise office blocks at the Markets area in Belfast has been rejected.

At yesterday’s Belfast City Council Planning Committee, council officers recommended for approval an application for the construction of four office blocks at the junction of Stewart Street and East Bridge Street, beside Lanyon Place station.

The council received 856 objections, and the application faced strong opposition from locals, who formed a campaign group “Sunshine not Skyscrapers” to counter the proposal. A similar application was firstly granted in 2017 by the council, but ended after a successful court appeal by objectors.

Letters of objection to the new application were forwarded by MLAs from different parties, Alliance’s Paula Bradshaw, the DUP’s Christopher Stalford, and the Green Party’s Clare Bailey, as well as from Belfast councillors Tracy Kelly and John Gormley.

A letter of objection and video link was also submitted by the Primary 7 Class of St Malachy’s Primary School.

During the planning committee meeting, a lifelong Stewart Street resident gave an emotional address, telling councillors she was “emotionally and mentally drained” in anticipation of the application being approved.

Cllr Garrett said: “I respectfully disagree with our officers interpretation of policy in respect of this application. I believe this proposal is not in keeping with, and completely incompatible with, the character of the residential neighbourhood of the Market.”

Mr Garrett said the plan would “destroy the Markets and turn it into a car park.” He said the height of the buildings were contrary to several items in planning policy, and added the plan would have a negative effect on the tunnels regeneration project in the area.

He added: “This should also be refused as it proposes a substantial building mass between the tunnels and the market community. The design will compromise the purpose of the community project, it will inhibit permeability and prevent direct access to the tunnels entrance.”

Tracy Conlon of the Save the Market group welcomed the decision. She said: “Residents are delighted that the hard work they put in over this difficult time has paid off, and we would like to thank councillors for seeing sense on this issue.

“For the past five years residents have been living in a state of perpetual anxiety with the threat of the skyscrapers hanging over them. We hope the Planning Committees decision to refuse planning permission will remove that threat once and for all.”

Fionntán Hargey of the Market Development Association said the decision made was “excellent.”

He said: “This shows that the interests of the communities like the Market who built, sustained and gave this city its unique character are now placed at the heart of the planning system. The residents were vindicated in the Judicial Review Court. They were vindicated by the MAG report. They have now been vindicated by the Planning Committee.

“We congratulate the residents on setting another historic planning precedent in this city, and hope for their sake that the skyscraper threat is gone for good, and that this community will now be given the space to pursue their regeneration ambitions with the Tunnels Project.”