Home Arts Powerful photography insight into the world of homelessness, addiction and destitution 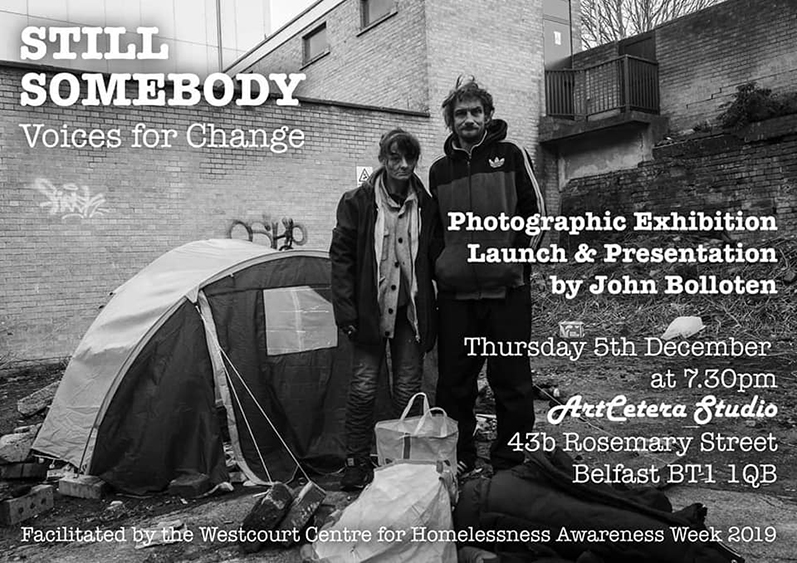 On my way last night to a photography exhibition in Belfast about homelessness I passed several people along the way who were lying on the streets of our city centre. The irony wasn’t lost on me.

The event, organised by the Belfast-based Westcourt Camera Club, was held in conjunction with the Westcourt Centre for Homelessness Awareness Week 2019.

The black and white images on the wall at the Artcetera Studio in Rosemary Street (taken by documentary photographer John Bolloten who is based in Bradford, UK) were stark, visceral and compelling. They portray people’s lives caught in the grip of homelessness and addiction. They also serve as a brutal reminder of the effects of austerity.

The images on the wall are from John’s book Nothing to See Here – an exploration into homelessness, destitution and drug and alcohol misuse in Bradford.

His work is driven by his interest in people who exist on the margins of society.

“You can’t just go up to these people and point a camera at them – you have to gain their trust. I spent years getting to know them and some of them became my friends, They trusted me to take these photographs,” said John.

Whilst some people may have genuine misgivings about photographing vulnerable people, I think that John’s work as social documentarian stands on its own merits. He became part of this community and obviously formed a warm bond with many of them.

The wider issue is how to effectively tackle homelessness. We know there has been in an increase in those who can’t find or afford a home to live in. A decade of Conservative/Liberal-Democrat policies of cutting vital services has had a brutal effect. The General Election on December 12 gives us a rare opportunity to deliver our verdict on the architects of austerity,

• Go to www.johnbolloten.co.uk/index.html for more information about John’s work