Home News Richard Dougherty tells VIEW about his journey from a small classroom for... 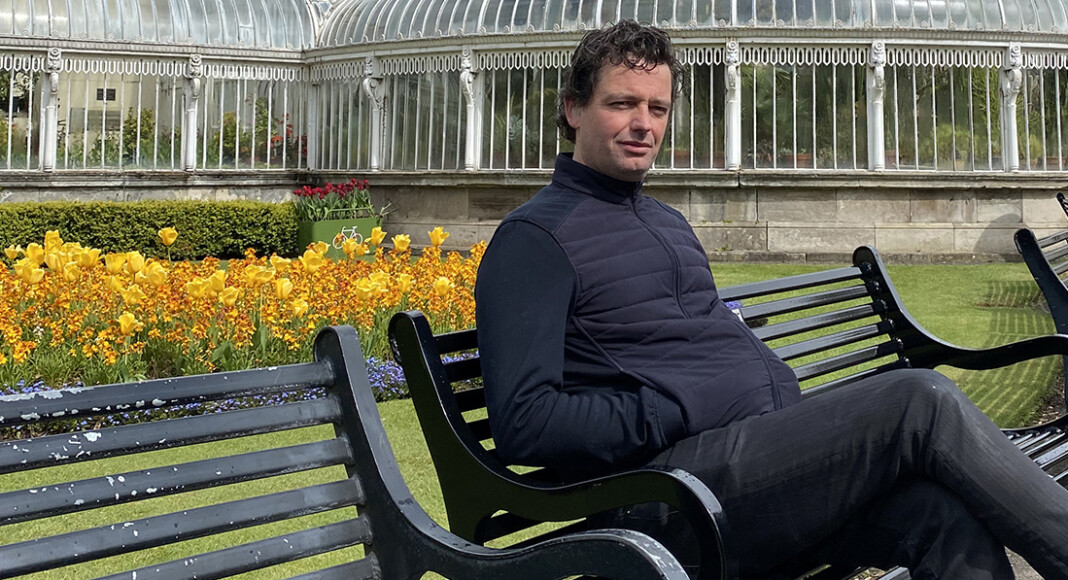 I arrived early for my interview with architect Richard Dougherty. For a change, the sun was shining. Perfect, I thought, for an interview in the scenic surroundings of Botanic Gardens in Belfast. But the God of weather had other plans as hailstones soon began to pound the ground and the top of my head.

I saw Richard approaching as I was rapidly seeking shelter under a tree. We both quickly agreed that a nearby cafe, which had tables and, more importantly, large umbrellas protruding above them, offered better sanctuary.

Forty-two-year-old Richard is deaf, as is his wife and two children. He lip-reads perfectly and we soon struck up a conversation. I asked was I easy to read? “Yes,” replied Richard. I decided to take that as a compliment.

The waiter who took our order was wearing a mask and had no idea that my guest was deaf and that he couldn’t hear or lip-read what the waiter was saying. I briefly became the interpreter. A further farcical moment occurred when I had to ask the waiter to turn down the cafe’s sound system which was playing loud, screechy pop music. I think in this case, Richard had a definite advantage over me.

Once our respective orders were brought to the table, Richard, who was born in Downpatrick, started to tell me a little about himself.

“I was born profoundly deaf. I can remember from the age of three or four, a number of trips to a hospital’s audiology department. My father, mother, brothers and sister can all hear. My wife and her family members are all deaf. They are two completely different worlds.

“I can remember a doctor at the hospital telling my mum, ‘I’m very sorry but your son can’t hear.’ In that very moment, I can remember feeling that I was a failure. But, luckily, I went to a small school for deaf children – that was my saving grace because I had a fantastic teacher with only around five pupils in the room. Bronagh Byrne (the guest editor of this issue) was one of my classmates.”

Later on, Richard went to a boarding school for deaf young people in England, from the age of 11 to 18. “This all helped to make me the person I am today.

“I then returned to Belfast to study architecture at Queen’s University.

“I was the only student who was deaf on my degree course, and I struggled very badly in my first year. It was probably one of the hardest experiences of my life.”

Richard paid tribute to a student friend who sat beside him in class and took notes for him. Socialising was also difficult as pubs were too noisy which made any kind of communication very difficult.

“What got me through university was that I happened to be OK at playing football,” said Richard. “I also had a great group of friends who made me feel that I was one of them.”

What drew him to architecture was that he felt he could communicate through the medium of drawing. He is now an associate architect with the firm, Hall McKnight. Richard is very proud that the firm was declared the winner in 2016 of an international design competition for a new building at Gallaudet University of the deaf and hard of hearing in Washington. The project is due for completion in 2025.

“They liked our poetical and philosophical approach to the design of the building,” said Richard.

Richard said: “I grew up in a hearing household whereas every single member of my wife’s family was deaf and a native sign language user. In many ways my wife has been more fortunate to be exposed to a community rich in values, beliefs and traditions. Too many hearing people view deafness as a deficiency rather than a separate linguistic context and culture. We are constantly told that we need to be ‘fixed’ in line with the socially acceptable norm.

“Even today medical professionals are telling parents of a young deaf child that early exposure to sign language will
harm a child’s ability to acquire spoken language when in fact it has been medically proven that children who are exposed to signing early in life are stronger in the acquisition of spoken English (a benefit of bilingualism).

“This kind of prevalent societal attitude is what we call ‘audism’ (i.e. a form of discrimination or oppression towards the needs of deaf people) and we suffer this on a daily basis. Growing up I was constantly reminded of my hearing loss by medical professionals which had enormous impact on my self-awareness.

“With our two deaf children being schooled in a mainstream environment, it’s a daily battle making sure that they have all the tools and support in place so they can learn on an equal footing as their hearing peers. It is our hope that they will grow into confident and resilient individuals – proud of their identity and able to bridge both the hearing and deaf worlds.”

• READ OUR LATEST ISSUE AT https://issuu.com/brianpelanone/docs/view_issue_59_2021

The Big Interview: Deaf actor Vilma Jackson talks to VIEW about life during the pandemic, standing up to racism, and why you should follow...

Surgery pays out over failure to tell deaf woman she was...