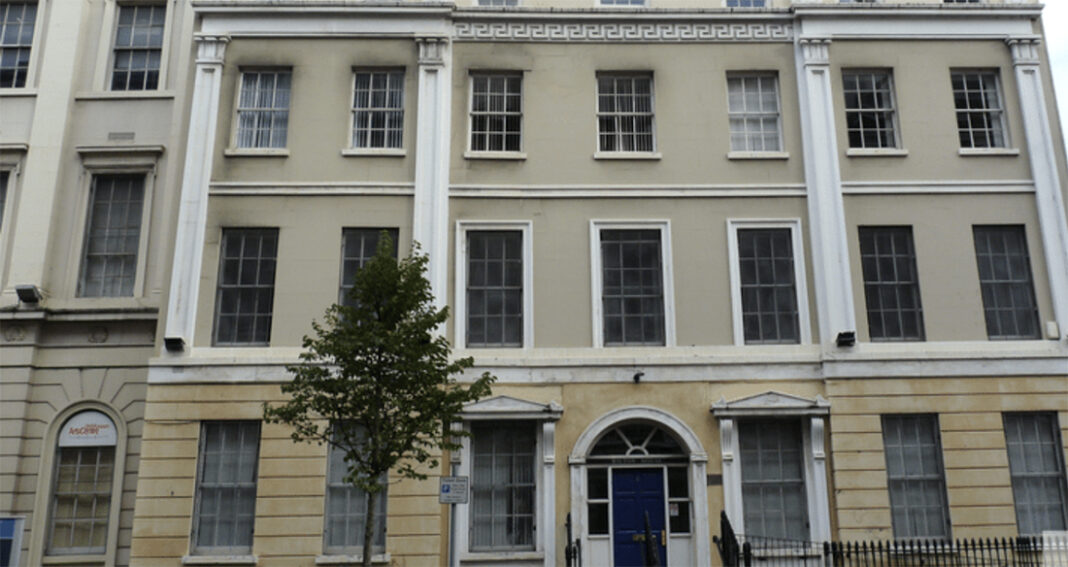 Belfast City councillors have approved a £4.5 million redevelopment of a listed 19th century Georgian building in Belfast city centre, despite recommendations to refuse the application by council officers.

At Tuesday’s (July 28) Planning Committee, officers presented a report rejecting an application to refurbish Wilton House in College Square North, and add a new building at its rear.

The development would provide eight apartments in the old Wilton House and the erection of a new build comprising a five-storey residential development providing 15 dwellings.

The application was refused by planning officers for multiple reasons. The proposed new build at the rear was seen as ‘over-dominant’ in relation to Wilton House and the adjacent terrace, and would be ‘detrimental’ to the look of the street.

The report also noted that insufficient evidence was submitted detailing the current condition of the listed building regarding the ‘survival of the historic fabric’ and how important features would be conserved. The proposal would therefore result in ‘unacceptable harm to the listed building’s essential character.’

Furthermore, the report noted the proposed development would ‘provide a highly unsatisfactory living environment for future occupants by reason of poor levels of light to the windows and rooms’.

It claimed there was insufficient evidence to satisfy environmental health requirements, and there was inadequate covered bicycle parking spaces in a suitable location.

The report concluded “Insufficient evidence has been submitted to satisfy Environmental Health that there will not be unacceptable harm to human health.”

Councillor Brooks said: “The idea of the plan being detrimental to the street scene, that it is over-dominant – I find that hard to understand, relative to what is there at the moment. I don’t think it is more dominating than what is there already. The proposal is certainly more attractive in terms of the street scene.

“We went on a site visit, and what looks like a very nice historic building in the city centre is at risk of going into rack and ruin. There is an urgency here in getting this building back into use, and when I look at what is proposed, and what it does for the building, relative to what is happening to that building at the moment, I find it very hard to understand how it is detrimental to the conservation area.”

The project is proposed by Wilton Group – a partnership between Daniel Jackson, of property developers Cornerstone, and Ciaran Toman, of property company Informed Percent.

Wilton House is at the end of a terrace of Georgian properties at College Square North, designed by Thomas Jackson in the 1830s. It became the Hotel Metropole at the end of the 19th century, and in 1907 the Adult Deaf and Dumb organisation established a mission hall there.

The redevelopment will go ahead subject to conditions under delegated authority with the council planning department.