Home News Thank you to all our supporters as VIEW magazine celebrates its 60th... 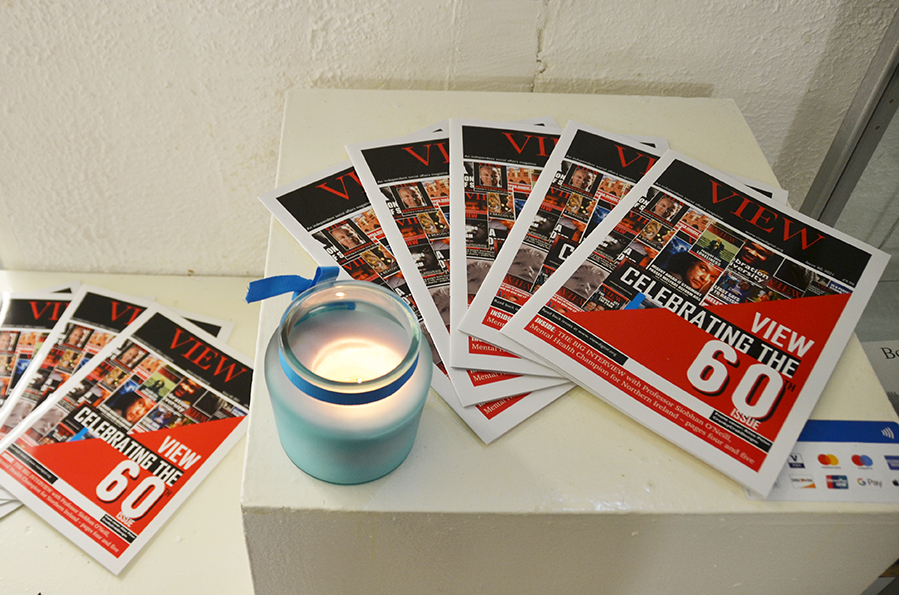 By Una Murphy, publisher and co-founder of VIEWdigital

When you reach a significant birthday, you don’t exactly want to shout it from the roof-tops, or maybe that’s just me. But when it comes to a celebration of the 60th edition of VIEW magazine, it’s fitting to invite some friends we’ve met over the years to mark the occasion. Ten years after the first edition was published, it’s time to look back at past editions and forward to the future.

Brian Pelan, co-founder and editor of VIEW magazine and the VIEWdigital website, at a celebration event in the ArtCetera studio in Rosemary Street, Belfast, reflected recently on the “roller-coaster ride” of setting up a new publication to highlight important social issues in Northern Ireland and beyond.

For the first edition of VIEW in January 2012, Brian met Jim Pierce, a volunteer in a suicide prevention charity in Belfast who lost two daughters. Jim said at the time: “I always pray that the tragedy of suicide doesn’t come to someone else’s door.”

In the 21st edition there was a photo-spread with homeless people that featured a front-page photograph of Kenny who was homeless and living in a hostel. I remember the event to launch this edition and Kenny and his friend James came along to tell people about their experiences.

The 60th edition of VIEW magazine, which will be available in libraries soon, features a mixture of important stories, including an interview from Alan and Jennifer Roberts on their battle for truth about their nine-year-old daughter’s death in 1996 and an interview with the former United Nations housing rapporteur, Leilani Farha.

Andrea Begley, disability rights advocate and singing sensation, brings us up to date with her work. “Covid has been tough for people in different ways. It is particularly challenging when you have a disability,” she says.

We are also pleased to have experts on mental health, Professor Siobhan O’Neill, and on housing, Professor Paddy Gray, in the 60th edition, as well as ‘Troubles’ victims campaigner Alan McBride and prison rights campaigner Erwin James.

In the New Year, in addition to quarterly editions of VIEW magazine. we’re launching a new monthly multimedia e-newsletter VOICES, which will be available first to registered readers and paid subscribers. We’ve decided we must now ask our audience to pay if they can afford to.

There are four options for our audience of nearly 25,000 people on the website and 10,000 people on social media, to support our independent community journalism, from a yearly subscription to registering as a reader free of charge: https://viewdigital.org/our-60th-edition-of-view-magazine. Will you support us?