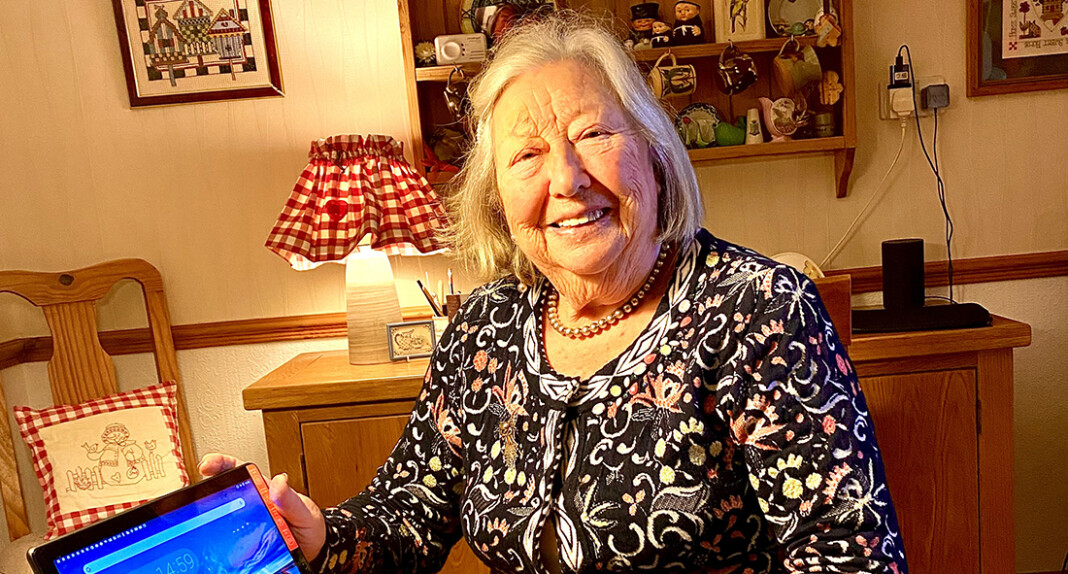 A woman who is in a knitting club which she playfully describes as ‘Stitch and Bitch’ has to be worth meeting in my book.

The interview was set up, and a few days later I was on my way to my assignment in Carnlough in County Antrim.

The names of Clipperstown, Ballycarry and Magheramorne drifted by as I sat in the railway carriage on my way to Larne train station from Belfast.

The next part of my journey was catching a bus from Larne to Carnlough. The timetable didn’t let me down, and soon I was meandering along the Antrim coast with my fellow passengers.

My interview with Pat McCormick in her home was at 2pm which left me time, before meeting her, to polish off a fry in the Harbour Lights cafe in the town. A scribe can’t work on an empty stomach. ,

Once inside Pat’s house, I was given a cup of coffee and a box of buns to choose from as she explained her new-found joy for digital technology after being given a tablet by the charity, Advice NI, during the early days of the pandemic.

“Initially, I paid no attention to the arrival of the internet into our lives. I was aware of it, of course. Patricia Donald from Advice NI give me the tablet. I then went to a computer class in our local library. I knew certain buttons on the device, and I was aware of the key pad because I used to type.”

Pat borrowed a manual from the library to help her to become more familar with using the tablet. “The first things I started to do was playing crosswords and quizzes.” She then went on to YouTube to watch videos about patchwork making. “I love it,” she said. “I also listen to music on it.” Pat uses WhatsApp to talk to her grown-up children, including her son and daughter in the United States.

Two other women about the same age as Pat also use tablets in her knitting group. “I do miss though not having someone younger in my home who could help me more in terms of using my tablet,” said Pat. She admitted that she is not so good when it comes to using email services. She firmly resisted the suggestion from me that perhaps she could give lessons on the tablet to friends who are presently not using the internet.

“Oh no, pet,” she replied. “I’m alright in what I know. I wouldn’t feel confident enough to do that.”

She will occasionally use Facebook but not Twitter. She is also very exact about when she uses her tablet. “Mostly around 7pm or 8pm in the evenings,” said Pat. She doesn’t use the diary on her tablet, preferring instead to use a well-worn paper copy which she shows me. She also prefers to read physical books.

Her local library is only opened three days a week. Pat said she would love to see the library opened every day from 9am to 5pm, and for regular computer classes to be held.

I asked Pat what would she say to someone of a similar age to her who said that they didn’t like computers, and that they would never use them?

“It’s ok if you think that but you don’t know how much you are missing out on is what I would say to them,” replied Pat.
“You have to try it and see. It’s like riding a bike. You will get used to it.

“It has been such a positive experience for me in terms of using the tablet. I don’t use it as much as I should though. I have to be critical about myself as sometimes I feel lazy about trying to learn more.”

I asked Pat has the tablet helped her to keep more in touch with her sons and daughters, especially the ones who don’t live in Ireland?

“We’ve always been good about keeping in touch,” said Pat. “It used to be letter writing, but now it’s mainly through the tablet or my mobile phone.”

Pat told me she loved to go on cruises before the pandemic brought a halt to her trips. “I would meet people of a similar age. I can’t wait to start going on cruises again as I know I will meet people who also love using their tablets.”

Later in the day, as I sat nursing a pint in the Glencloy Inn in Carnlough before my trek home, via bus and train, I thought about Pat and her new-found joy with using the internet.

She was delightful company and an inspiration to all those of the older generation. Long may she tap away on her tablet.

• Subscribe now to read our latest edition about the digital divide – https://t.co/v93KRWaGTS